Skip to content //facebook
Home » Solutions » Mechanics: Dynamics » A boy throws a ball straight up from the top

A boy throws a ball straight up from the top of a 12-m high tower. If the ball falls past him 0.75 s later, determine the velocity at which it was thrown, the velocity of the ball when it strikes the ground, and the time of flight. 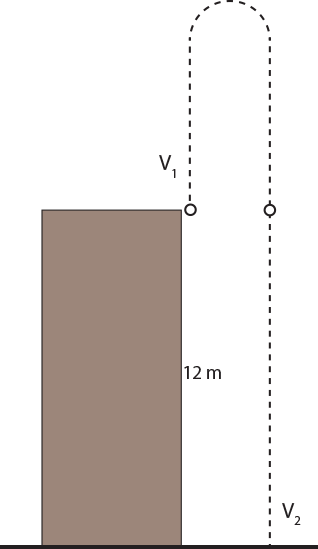 Our point of origin would be the location where the boy first throws the ball from. That would mean after 0.75 s, as the ball passes him, the displacement of the ball would be zero, since the ball is at the same location from where it started. Let us use the following kinematics equation to figure out the velocity of the ball as it was thrown.

Note that (v_1)_0 represents the velocity at which the ball was thrown up.

(Solve for the positive root of t)

We can now figure out the speed of the ball at when the ball impacts with the ground using the following kinematics equation: