The ends of the triangular plate are subjected to three couples. Determine the plate dimension d so that the resultant couple is 350 N•m clockwise. 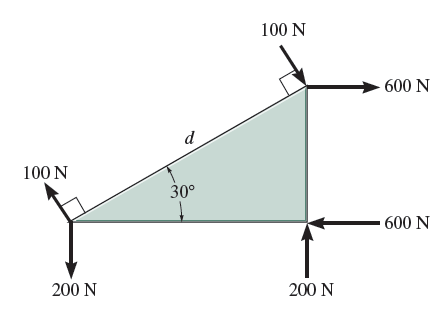 Let us write a moment equation assuming that clockwise rotation is positive.

When solving questions with coupling, it’s a good idea to visualize how the object would spin. For example, looking at the 200 N forces applied at the bottom of the plate, we see that one force pushes it up on the bottom right corner, while another 200 N force pulls it down on the bottom left corner. If this plate was lightly pinned to a wall allowing it to free spin, then those two forces alone would make it spin counter-clockwise. Thus, the moment created in our equation would be negative (since we assumed clockwise rotation to be positive).