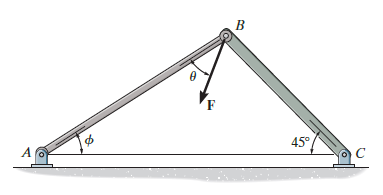 We will first draw the vector components and set Φ = 60° as stated by the question.

We can next draw each component tail to tail as follows:

We can now use the law of cosines to figure out force F.

(Take the square root of both sides)

We can now use the law of sines to figure out the angle \theta. We will use the value we just found to do so:

This question can be found in Engineering Mechanics: Statics, 13th edition, chapter 2, question 2-13.

2 thoughts on “Force F acts on the frame such that”