Skip to content //facebook
Home » Solutions » Mechanics: Statics » The tool at A is used to hold a power lawnmower

The tool at A is used to hold a power lawnmower blade stationary while the nut is being loosened with the wrench. If a force of 50 N is applied to the wrench at B in the direction shown, determine the moment it creates about the nut at C. What is the magnitude of force F at A so that it creates the opposite moment about C? 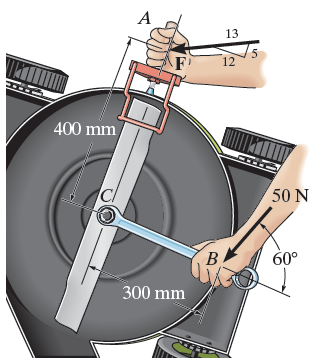 Show me the final answer↓
The moment at C which occurs because of the force at B can be calculated by multiplying the perpendicular force by the distance to point C. Remember that a force (or a component of a force) passing through the point of interest creates no moment. Refer to the image below: 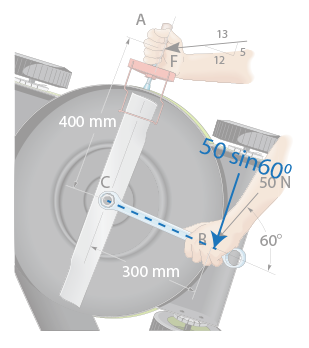 The moment at C is:

To figure out the force F which creates an opposite moment at C equal to the moment created by the force at B, we can write the following:

Since the force must create an opposite moment that cancels out the moment created by the force at B, the total moment created at point C must be 0. At point A, only the vertical component of force F will create a moment since the horizontal component will pass through point C. Thus: